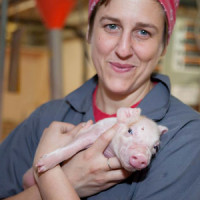 Fabien joined the Woof-it team in September of 2014. Raised in a Los Angeles canyon where dogs, children, and coyotes roamed in relative harmony, she has cared for animals since she was a child.

As an adult she has worked at a mobile pet vaccine clinic, a rural Italian dog shelter, and farms around Europe where she has cared for pigs, donkeys, chickens, and pheasants. In 2009 she earned an M.S. in animals and public policy from Tufts University’s veterinary school.

These days, in addition to walking dogs, she writes about human-animal relations for several news and culture outlets. She also does occasional work as an Italian translator and portraitist, and during summers she pedals people around Boston on a pedicab. She’s wild about gardening, films, and salsa dancing, and she lives in a mixed-species household in Jamaica Plain.

Serving all or part of these communities:

We give your dog individual attention! Pups come to trust and rely on the walker who visits them.
We offer visits for 15 minutes, 30 minutes or an hour, and we keep our walking groups small- never more than three pups, and more often pairs or even solo walks. We know that socialization is important, but understand that some dogs prefer to ‘go it alone’, so we offer solo walks for no extra charge.

At Woof-It!, we make sure that at least two of our team members know each pup’s routine, so we never miss a visit if a walker needs a day off. Our team is small enough to become invested in the well being of every pet we visit, but large enough to meet all the walking, sitting, and playing needs of our clients.

Going out of town? No worries! Woof-It! provides personalized in-home care for dogs, cats, fish, birds, rabbits, chinchillas, and ferrets. We can provide two, three, or four visits a day. We can even have one of our team stay in your home with your pets overnight. We provide all the care your pets may require and also bring in mail, water plants, turn lights on and off and other small chores to ensure that your home is safe and well looked after.